Ashoka actor Rosario Dawson celebrates Star Wars Day with a photo of her with Mark Hamill and his Luke Skywalker motion capture actor on the set of The Book of Boba Fett. First appearing in season two of The Mandalorian, Dawson's Ahsoka Tano would later return in The Book of Boba Fett. Dawson's return was coupled with a de-aged version of Hamill's Luke Skywalker, who was first seen in The Mandalorian's season two finale.

Luke Skywalker's triumphant return was a high point of The Mandalorian for many fans. Although The Book of Boba Fett proved more divisive, the original Star Wars character's reappearance was welcome. The episode in question sees a de-aged version of Luke training Grogu and offering him the choice of either walking the path of the Jedi or choosing his friend, the Mandalorian. Disney shared a behind-the-scenes look at the episode in celebration of Star Wars Day, including a non-CGI version of Hamill in costume interacting with Ahsoka, Grogu, and his motion-capture body double Graham Hamilton.

Joining in the Star Wars Day celebration, Dawson posted a photo of her on set with Hamill and Hamilton with the caption reading: "May the fourth be with you." Both Hamill and Hamilton are wearing the same black costume, but the latter is also sporting motion capture dots on his face and upper body. The heartwarming throwback photo also features Dawson lovingly holding the Grogu prop doll in her arms. Check out Dawson's post below: 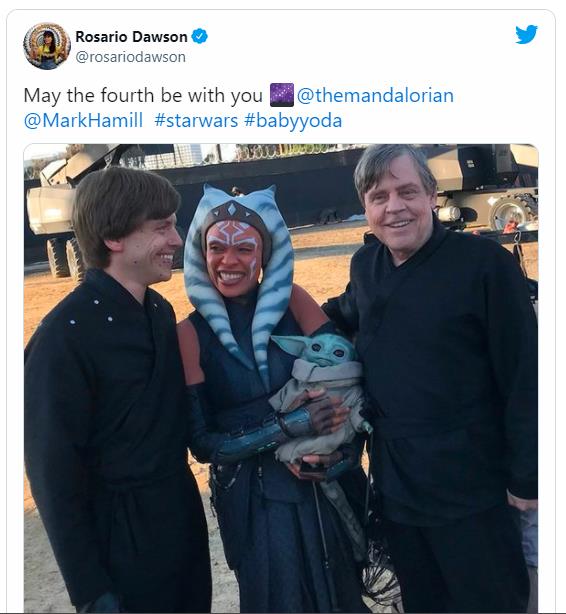 Although there hasn't been a Star Wars movie since 2019's Star Wars: The Rise of Skywalker, Star Wars Day is still an important day for many fans. Even though Dawson herself is now cemented as the live-action version of Ahsoka in Star Wars canon, it's clear that the actor was still thrilled to work with Hamill, the original Luke as first seen in Star Wars: Episode IV – A New Hope in 1977. The inclusion of Luke was also a surprise for Dawson as, in the script for the episode, the name Plo Koon is used in place of Luke Skywalker, which must have made the whole experience even more memorable.

Disney is now capable of recreating Luke without Hamill's involvement. However, it's nice that the actor is still brought on to contribute a performance for the visual effects artists working on the shots and as a reference for Hamilton's motion-capture performance. It remains to be seen whether Luke will reappear in episodes of future Star Wars shows, but, as evidenced by Dawson's picture, the experience on set that day shooting The Book of Boba Fett was a positive one.